Are you up to code? We can get you there.

What about dissolved oxygen?

In a major change that impacts installers, the 2016 NFPA 13 adds a new requirement that a single air vent be installed for each wet sprinkler system to help reduce potential corrosion activity due to trapped air. See below:

A single air vent with a connection conforming to 8.16.6 shall be provided on each wet pipe system utilizing metallic pipe.

The vent required by 7.1.5 shall be located near a high point in the system to allow air to be removed from that portion of the system by one of the following methods:

An NFPA task group addressed the issue and concluded that venting the trapped air in a wet system could:

The best solution to meet the code!

The Potter PAV is a UL listed and FM approved automatic air vent for fire sprinkler systems. It is designed to reduce the amount of air in a fire sprinkler system will little or no maintenance. It is the ideal choice for meeting NFPA 7.1.5. The product is also available as a PAAR-B with drip pan. Andy Kaempfer, Product Manager for the Corrosion Division at Potter said,

"We think that this code requirement is great for the fire protection industry. It will ensure the longevity of pipe systems by reducing corrosion, saving building owners time and money." Kaempfer continued, "I think the Potter PAV is the best solution to meet the new requirement. It is easy to use and the fact that it is automatic saves time and money."

In a recent study by FM Global, leaders in loss prevention, it was determined that corrosion in fire sprinkler systems is a significant issue and can lead to leaks and system failures. One of the leading contributors to corrosion is trapped air in wet pipe systems.

Trapped air in wet pipe systems provides the oxygen source for steel pipe corrosion. Minimizing air pockets in wet pipe systems is recommended. An air release valve, which is capable of venting trapped air in the pipe, can mitigate this kind of corrosion. Limiting the introduction of oxygenated fresh water into the piping system can also be an effective mitigation strategy for wet pipe systems. Similar to the dry pipe or preaction systems, nitrogen gas can also be used as a supervisory gas to reduce oxygen concentrations in the sprinkler water of wet systems.

To view the entire article on FM Global's findings and to download the research paper, Corrosion and Corrosion Mitigation in Fire Protection Systems, click below. 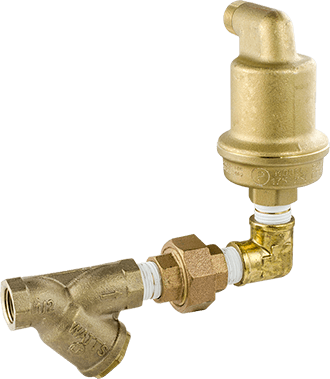 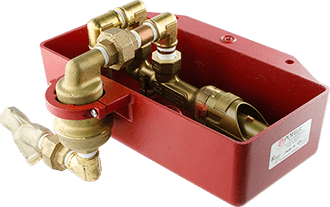 Looking for other ways to combat wet system corrosion?

Replace the oxygen with nitrogen

Reducing the oxygen levels in wet fire protection systems is essential in protecting the system from the effects of oxygen related corrosion often found at the air water interface in the fire sprinkler piping.

Prevent the introduction of new oxygen

The VSR-AT is a UL Listed and FM Approved flow switch that can be tested without flowing water and introducing new oxygen into the system.

The intent of the product is to vent as much air from the fire sprinkler system as possible. The PAV provides automatic venting of air as the system is being filled. Furthermore, trapped air can also be vented as the air in the system migrates to the vent location over time. The air vent will automatically close when water reaches the vent. The PAV provides a 1/2" NPT-male connection which will allow installers to safely pipe to a drain, any inadvertent discharge of water that is inherent in the operation of the automatic air vent.

The intent of the product is to vent as much air from the fire sprinkler system as possible. The PAAR-B provides automatic venting of air as the system is being filled. Furthermore, trapped air can also be vented as the air in the system migrates to the vent location over time. The air vent will automatically close when water reaches the vent.

The PAAR-B provides a 1/2" NPT connection in the bottom of the pan which shall be used to pipe to a drain.