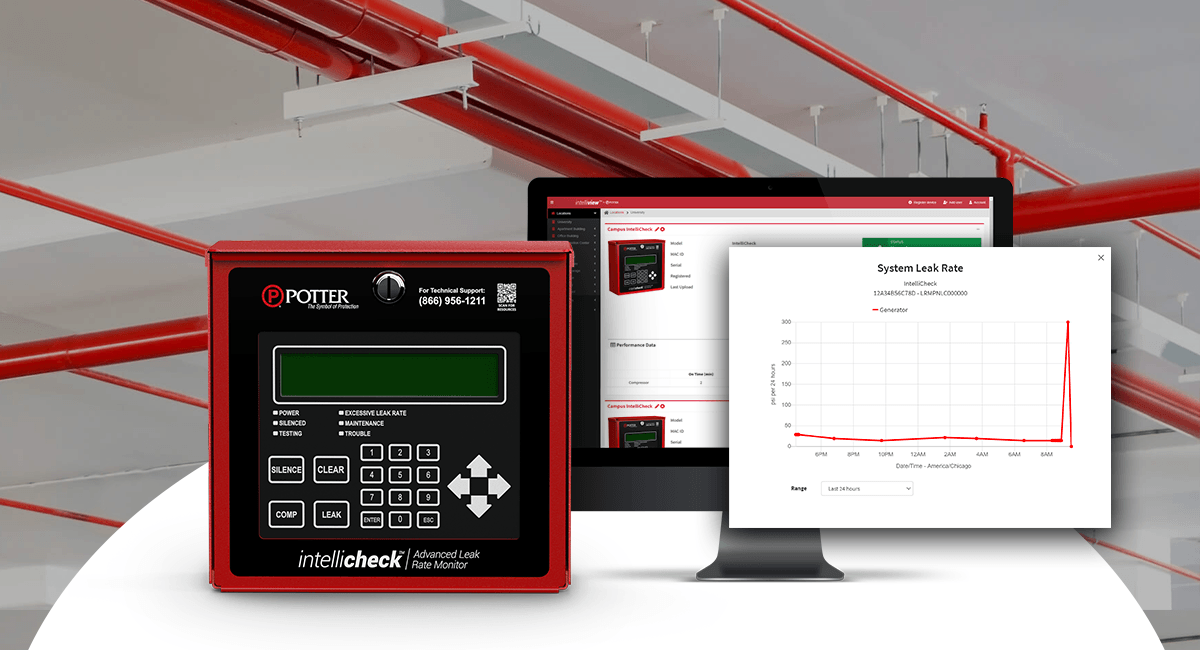 One of the keys to assessing the overall health of a dry or preaction system is to keep an eye on its leak rate. Excessive leak rates can put unnecessary strain on air compressors or nitrogen generators. For systems with air compressors, this can lead to an increase in corrosion since the more the air compressor runs, the more oxygenated air is introduced into the system. Increasing leak rates can also signal serious potential problems looming.

Prior to the 2008 edition of NFPA 25, Standard for the Inspection, Testing, and Maintenance of Water-Based Fire Protection Systems, there were no “proactive” requirements to test for leak rates on a regular basis. In those early editions of NFPA 25, all that was required was simply to address leaks that were noted to be in excess of 10 psi per week. There was no associated test called out in the standard.

Beginning with the 2008 edition of NFPA 25, testing the leak rates of dry and preaction systems on a regular (3-year) frequency became a requirement. This testing intends to hopefully identify leaks before they become a major problem. The standard allows for either a 40 psi pressure test for 2 hours with an acceptable loss of 3 psi, or simply shutting off the air supply for 4 hours and if the low pressure alarm activates during that time, the leaks must be addressed.

The Value of Data

Either of the two test methods permitted by NFPA 25 will provide owners with a high-level indication of how leaky their system may be. But actually capturing the pressure loss data combined with the ability to track changes over time, can provide a much more thorough look into what may be occurring within the system. In addition, having a sense of how often the nitrogen generator or air compressor is running is also important. Among other things, this provides the peace of mind of knowing that the system won’t accidentally trip with a short power outage.

Although the NFPA 25 test methods have been proven valuable, performing the actual tests are time-consuming and don’t always get performed. And even when the testing does take place, locating data from previous tests to compare to is often difficult. Advances in technology now allow these tests to be completed automatically and the all-important data they generate, to be captured and stored.

With the release of Potter’s new IntelliCheck™ Advanced Leak Rate Monitor, the testing of leak rates can now be performed as often as needed without having to coordinate with other inspections or tests. A major feature is that it can be used on any dry or preaction system with any air or nitrogen supply arrangement, with or without an air maintenance device. This includes all nitrogen generators, riser-mounted and free-standing air compressors, shop air, and bottled nitrogen.

The IntelliCheck™ temporarily interrupts the nitrogen or air supply while a transducer measures any pressure loss that takes place in the system. The pressure decay is calculated by the device to report leak rate and/or pass or fail of either NFPA 13 (for initial installation testing) or NFPA 25 (for existing systems) requirements if those test results are needed. At the same time, the leak rate historical data is captured and can be viewed locally at the device, or anywhere using Potter’s cloud-based IntelliView™ dashboard.

Besides leak rate data on the system itself, nitrogen generator or air compressor runtime can also be monitored by the IntelliCheck™. This provides users with an opportunity to predict or diagnose supervisory air problems. Having this information together with times, dates, and leak rates, allow for analysis not previously available.

The ability to perform these important tasks anytime, and to view and analyze the data from anywhere represents a tremendous step forward in maintaining the operational readiness of dry and preaction sprinkler systems.

Back to All News